We've given the exception reporting in Codebase a bit of a revamp in the last few days. Up until now, each individual exception has been displayed on the exceptions page in the order it arrived.

We've changed the primary exceptions display to group all similar exceptions together, and display a the number of times that exception has been received, along with a coloured indicator to allow you to see at a glance your most frequently occurring exceptions, and those that need the most urgent attention.

In order to help you see when a an exception first appeared we've also added a quick information pane about similar exceptions when you're viewing a particular instance. 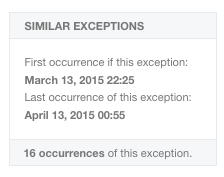 In the coming weeks we'll be further enhancing exceptions with the ability to mark them as resolved, and having tighter integration with Tickets.

My name is Dan. My primary role at aTech is to develop and maintain our hosted applications, such as Codebase and Deploy. I'm often the person who responds to helpdesk tickets where further investigation is needed. My preferences include; beer over lager, dogs over cats, coffee over tea and cars from the 80s.